For the Love of the Game

One of my biggest concerns about living in Baños was how I would play tennis, since I plan to play for my high school when we return. My dad and I asked around town and heard two answers: No hay (there aren’t any), or Al Sangay (at the Sangay hotel).We decided to look into it and went to the Sangay Hotel. Once a luxury hotel, the place is well kept but it doesn’t seem that any money has been put into it in twenty years. The ping pong table doesn’t have lines. The foosball table is losing its paint. But we did find a tennis court. 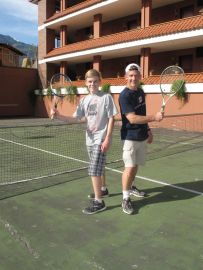 For $5 an hour, the staff lent us rackets, balls, and let us play on the court. It felt so good to swing my arms, move my feet. Granted, the ball wasn’t going where I wanted it to, but I was still playing. The conditions were different, though. The two rackets they lent us were at least fifteen years old. With no grips on the handles and one of the frames bent, their life was coming to an end. The staff lent us four balls, most of them very squeezable with little fuzz. The court itself was in similar condition. It had cracks and holes were in the net. The worst part of the court was that there were thick bushes nearby. The occasional wild hit would send a ball  deep into the brush. Since the plants hung over a wall, I would climb on my dad’s shoulders to reach the ball. Sometimes we never found it. Our ball count dwindled from four to three, three to two, and then down to one. After every point play was stopped to go and get the ball. Luckily, we had a friend coming from the States with two rackets and balls in a few days, so we enjoyed our last few times with the old rackets and ball. Then the ball got stuck in the plants and we were done playing until our friend arrived.

When I started using my racket from home again, with new balls, it felt great. I really appreciated the grip, the strings, and how the balls bounced. I laughed with joy and hit the ball. What fun! I loved our time playing with antiquated rackets and balls, for the experience and for how much more it made me appreciate what I have. 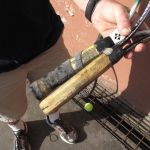 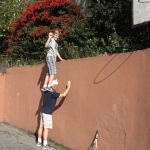