The frail car bumbled down the road as we made our way from Pokhara to Nayapul, the starting point for our trek to Annapurna Base Camp. I sat tightly squeezed between Dawson and Dhaba, our porter. Our guide Arjun sat in the front. The clear skies revealed massive white peaks that grew taller as we drove toward them. We had planned the whole trip with Arjun, but I had never met Dhaba, a thin wiry man short in stature with a kindly face. We arrived at our destination an hour later and, after a light lunch, began walking.

Dhaba carried Dawson’s pack for the first day to ensure that Dawson’s knee was healed well enough. After that though, both Dawson and I shouldered our own 30-pound packs for the rest of the trek. We both felt it important that we carry our own weight. Dhaba happily carried Arjun’s bag and brought our food to us each day with a smile. Despite not having much to carry (some porters carry two heavy bags at a time, a fact that astounds me given the terrain), Dhaba was a good travel companion and definitely added to the trek.

To give us more time in Kathmandu, and to open the possibility of a day for bungee jumping, we shortened the ten-day trek to eight days by walking farther and faster for the rest of the trek. Although there were a few flatter sections, the majority of the trek was straight up, or straight down. Several times we descended from a ridge into the valley, just to climb back up the next ridge. One of the days, after reaching the base camp, we descended 2000 meters, leaving my joints aching. We walked for six to seven hours most days, resting for a few minutes after each hour. We passed through small towns and villages; while some of them had been there for a number of decades, many were set up for trekkers during the peak season (pun partly intended). It was interesting to see so many restaurants and lodges vacant during what is considered the low season.

Most days were full of fog and occasional rain. This is monsoon season, after all. I did not mind getting wet, except for the fact that nothing dried. Pulling the same damp socks on for the fourth day in a row was not a pleasant feeling. We did have times of sun, though, times that made me drip sweat and long for the clouds once again. Each day we briefly glimpsed the majestic Himalayas jutting into the sky. They were so impressive that these short glances were enough. Dawson and I really enjoyed the trek. One drawback, besides sore legs and feet, were the leeches. After finding forty on himself one day, Dawson (and I) grew a little paranoid about the blood-suckers. Leeches move like inchworms, look like slugs, and splatter blood when squished by an angry foot. They are not pleasant creatures. Fortunately, they pose no real harm and did not dampen our spirits throughout the trek.

The day we arrived at Annapurna Base Camp,or ABC as the guides fondly refer to it, was spectacular. We left early in the morning to a blue sky that stayed clear the entire time we hiked. Behind us, the sacred Macchapucchre mountain cut into the sky with its triangular knife-like summit. On the sides rose rocky slabs of mountains, ornately decorated with spots of gruffy greenery. These pillars of rock were interrupted by columns of water, rushing eagerly to feed the ever hungry roar of the glacial river. A score of waterfalls, all worthy of attention in their own right, surrounded us. More proximate to us floated variegated flowers in a green sea of knee-high grass. The foliage has a short growing season, since snow and ice cover the entire area during the winter. Huge striated rocks, deposited by the glacier (maybe called nunataks if I correctly remember from ninth grade earth science), populated the fields. A hundred yards to the right lay a steep ravine where the glacier had receded. Looking over the edge illuminated a seeming apocalyptic wasteland, void of life. Stones and gravel were the sole inhabitants of the lonely pit, juxtaposing our path through the vivacious field. Ahead of us, a mountain rat, a small tailless animal with rabbit-like ears, scurried across the trail. Directing my gaze forward and up revealed the Annapurna massif. Enormous white peaks jutted prominently into the sky.

I could picture the Indian subcontinent crashing into Asia, thrusting these peaks skyward. We took a lot of pictures that surely fell short of the sublime surroundings, but we tried nonetheless. That night we celebrated at the hostel that is situated at base camp with pizza. Arjun surprised us with Cokes and Mars bars. The Mars bar packs an astounding 36 grams of sugar into its 51 grams of chocolate. I relished every bite. Our day at Annapurna Base Camp was truly special.

The remaining three days of the trek consisted of a lot of descending (ABC lies at 4130 meters of altitude), a day at natural hot springs, and the ride back to Pokhara. By the end, although Dawson and I were extremely glad to have done the trek, we were fairly tired of walking. Our trek was incredible as we witnessed the majestic mountains of Nepal, experienced the satisfaction that comes only a long day, and enjoyed a fantastic opportunity.

Now, about that hot shower… 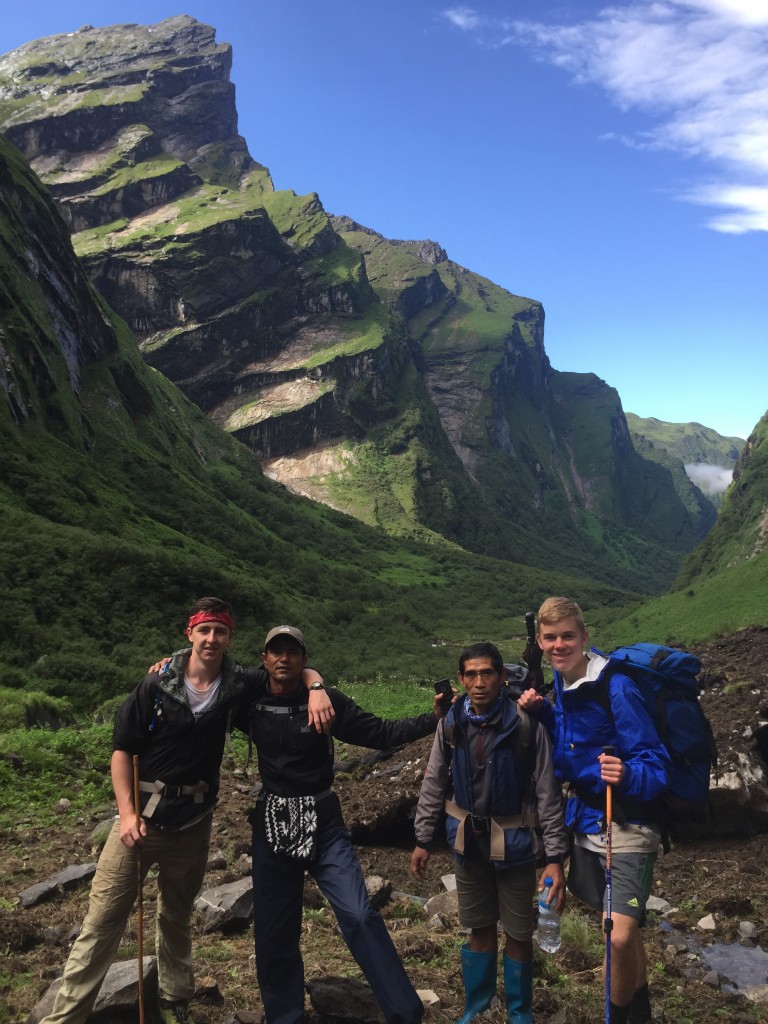 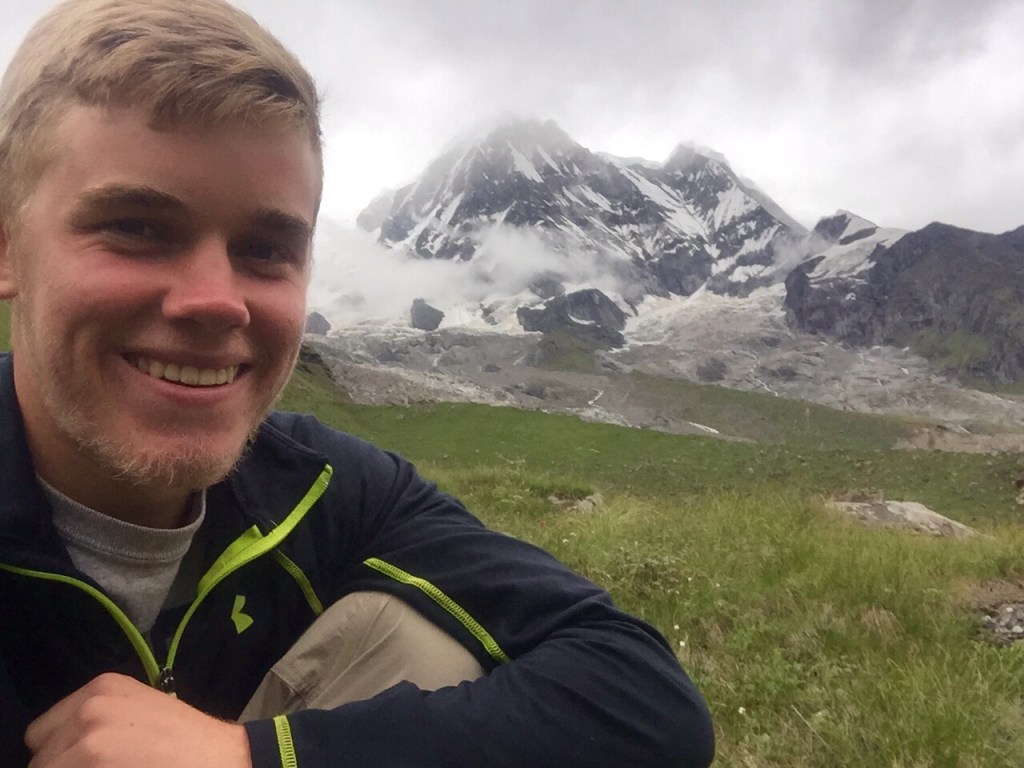 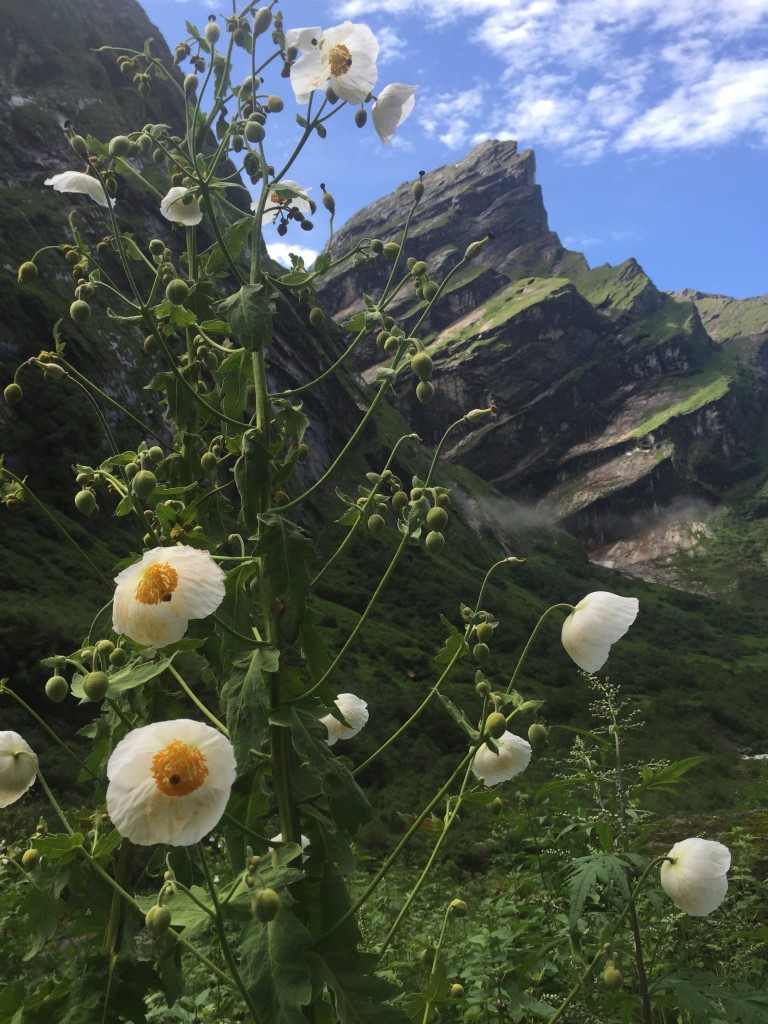