Shelter from the rain

Around noon today we packed day back with water, rain jacket, a camera, and a guidebook and set off to do a hike. We wanted to hike to the top of Champadevi, one of the mountains that surround the Kathmandu Valley. We took a taxi to what we believed to be the beginning of the trail. We then walked along the small ridge for a few minutes before the path abruptly ended, making us realize that this was not the right place. Dawson and I decided to take another taxi to Chobar, where we knew that there would be at least a short hike. A long set of stairs runs adjacent to a concrete bus stop, where a short man lay sprawled out, fast asleep. We ascended the stairs for a few minutes before reaching the narrow paved road. Continuing to go up, we came to a small village composed of stone alleyways and short cement buildings. Clouds covered the sky in a white sheet, precluding the sun’s sharp rays from piercing our already burnt skin. We were both disappointed not to have found the hike that we were looking for, but agreed that this short ascent would suffice. A light drizzle began to fall. As we walked around the town on top of the hill, I noticed how the quiet town starkly contrasted the bustling, polluted inner-city. The roads were not well paved and lacked the honking taxis of the city. People strolled to local restaurants breathing freely; no need for the respiration masks with which people cover their mouths in the city to prevent breathing in dust and pollution. The rain picked up and we put on our rain jackets. Then it began pouring buckets, a torrent of water trying to inundate us. No one was on the streets anymore; very little moved. With no place to be and no place to go, Dawson and I lowered our heads and trudged on, getting soaked despite our raincoats in the process.

A short stout woman stood silhouetted in a doorway. I could see by her expression that she commiserated with us about the rain. She waved her hand, motioning for us to walk over. She then invited us into her home on the bottom floor of a concrete building. Dawson and I gladly accepted and ducked our heads as we stooped below the top of the door frame. Following her example as well as the local custom, we removed our shoes before entering. She motioned for us to sit down while we waited out the heavy rain. Her husband, a thin order man, came in from the rain shortly after. The room we were in was small, no bigger than 60 ft.², and primarily filled by a bed. The woman and her husband sat on the bed facing us. We rested on stools opposite them. The lady said something in Nepali to us, which neither Dawson nor I understood, so we just nodded along. I tried asking her about the rain in English but then she was at a loss. Realizing that none of us spoke each other’s language, Dawson and I just smiled at them and they replied with smiles of their own. I looked around the room to gain a better understanding of where we were. The small doorway, partly blocked by a sideways umbrella to keep the rain out, provided the only source of light. A low ceiling, no higher than 5’6″, was covered by an array of flattened 20 kg canvas bags. Some of them advertised “rich long grain rice.” Dust masks, perhaps for trips into the city, hung from a tack in one of the bags. The simplicity and small size made the room quite cozy, a shelter from the rain. The woman wore a red dress and shawl with faded flowery designs. A red dot on her for head and indicated her Hindu faith.

We sat in a serene silence, watching the rain cascade outside the small doorway. The man sat with one leg across the other, and held his knee with long slender fingers. Gray hair poked out from under his traditional probably hat, which was round and red with a flat top. He sat motionless, his countenance one of peace, as he stared out at the pounding rain. The woman broke the silence. “Chia?” she asked. For some reason, I assumed she meant tea. We declined politely. A few minutes later, the woman rose and walked into another small room adjacent to us. It appeared that their entire home consisted of these two rooms and a bathroom. Despite what we had said, the woman returned carrying tea for each of us a few minutes later. The tea was very sweet and I sipped it slowly while meditatively watching the rhythmic rain. We thanked the lady with a nod and a smile. I was amazed at her and her husband’s hospitality. The rain lightened up and we stood to leave after I swallowed my last sip of tea. Using hand gestures, we asked to take a photo of them. They consented and sat rigidly on the bed. The man adjusted his cap and then we took their picture. After showing them the photo, we put our shoes on in the doorway. We gave the kind older couple 100 rupees (about a dollar) for the tea and to express our gratitude at their hospitality. Then, after a quick bow of thanks, we walked down the street. That unforeseen incident amazed me, as they had welcomed us into their home without expecting anything in return. Their actions embodied kindness and generosity. Since the rain had slowed to a drizzle, there were other people walking about the streets of the town. Their blank visages gave way to easygoing smiles and we said “namaste” with hands clasped and a quick bow as we passed. Dawson and I continued walking until we incidentally arrived at the exact place we had started. The whole hike was a unique, serendipitous experience. 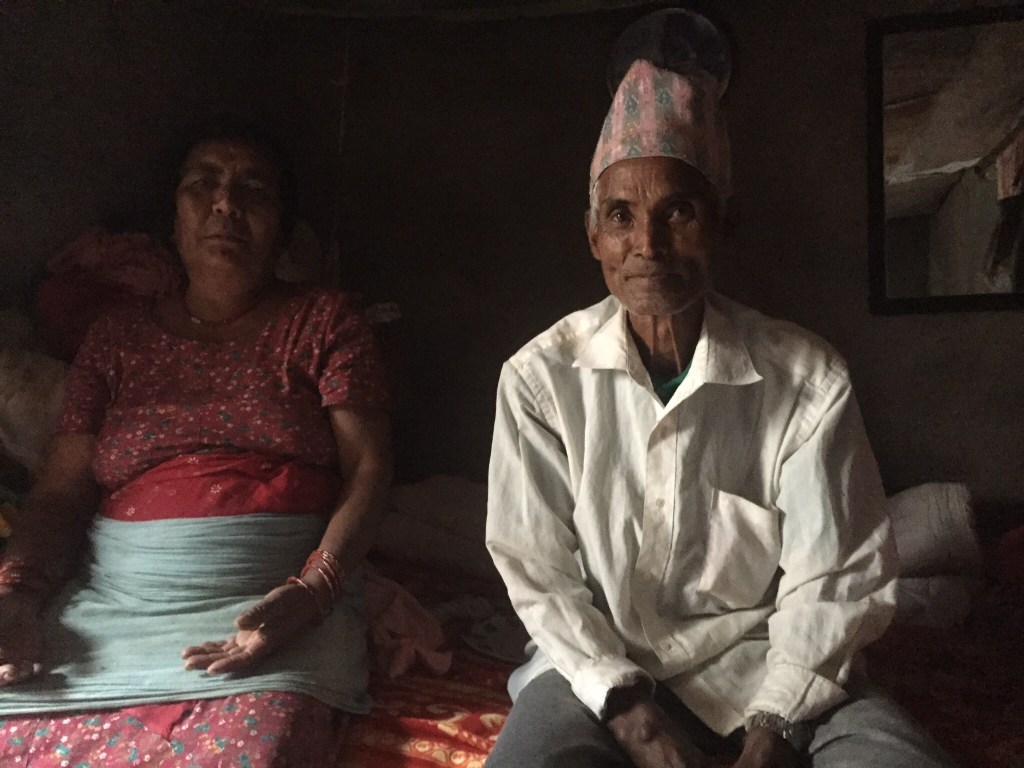 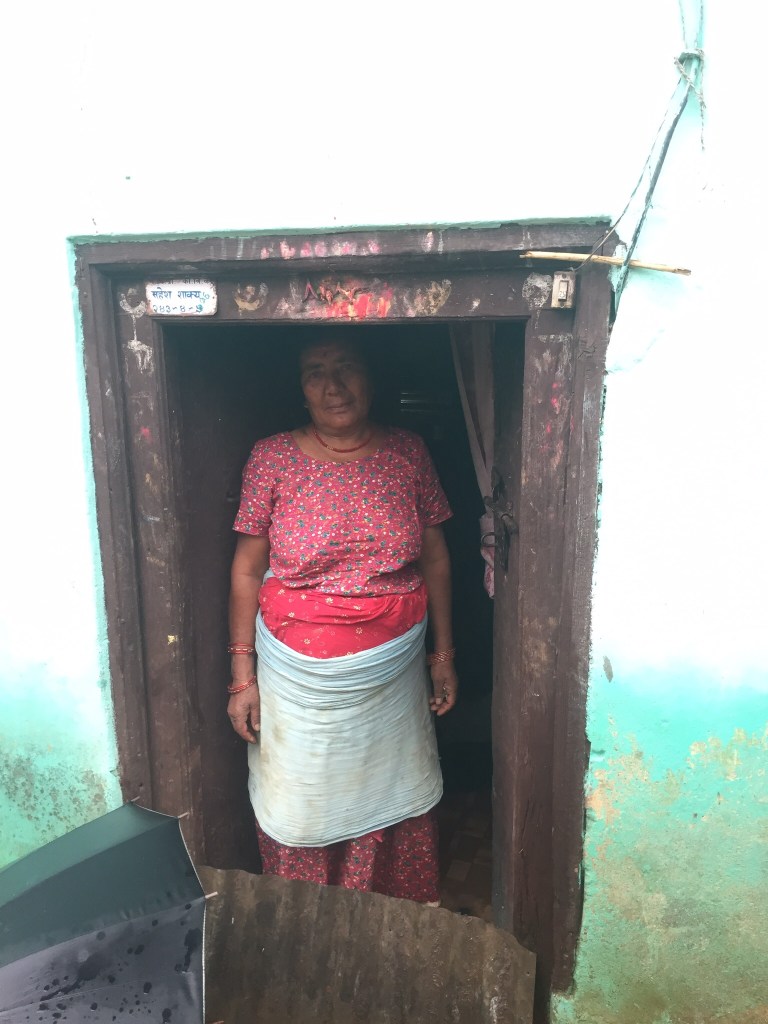 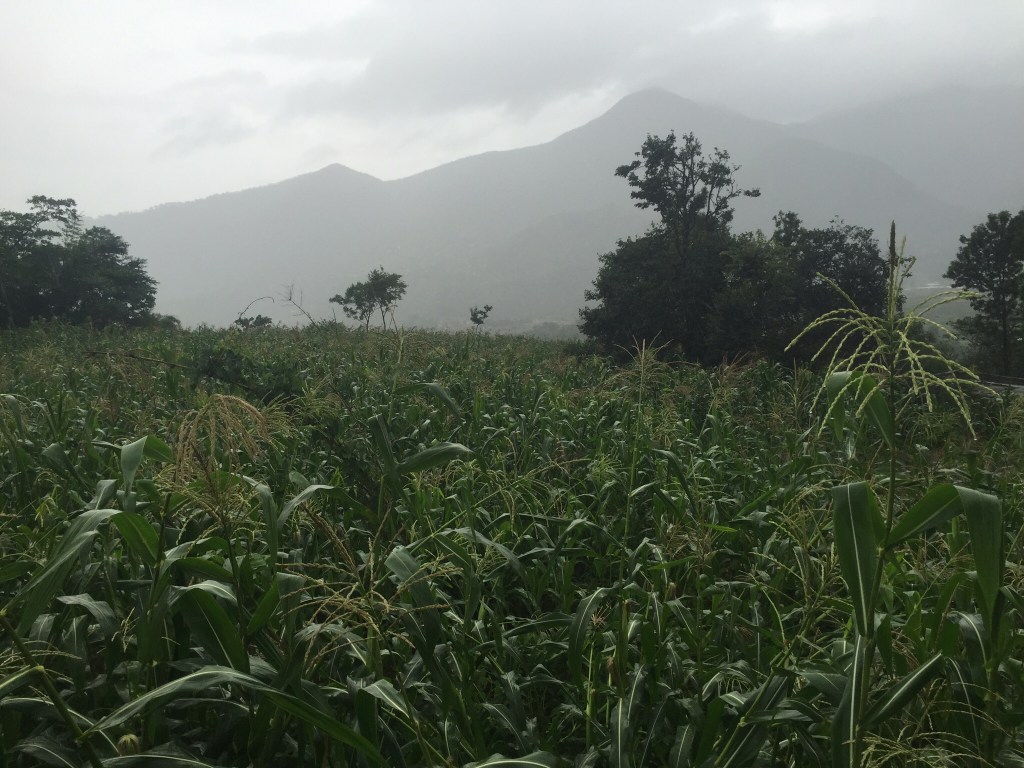